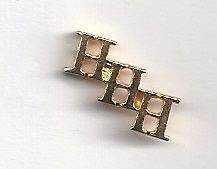 Forty-two years ago today, and when I was a young boy, former Vice President and 1968 Democratic presidential nominee Hubert H. Humphrey (1913-1978) gave me this brass "HHH" campaign pin.

The time and place: March 24, 1972, San Francisco Fairmont Hotel. I was 14 and snuck into a private reception the irrepressible and wonderfully kind HHH held for people designated to be his national convention delegates if he won the California Primary. After his brief speech, HHH circulated shaking hands, posing for pictures and (for my little brother Pat and me) signing multiple campaign brochures. Then some unexpected guests arrived:

While HHH worked the room, a group of pretty young stewardesses peeked inside the doorway and recognized him. Sheepishly, one of them asked a campaign aide if they could come in and shake hands with the candidate. Humphrey looked over and saw their group; not waiting for his aide to grant permission, HHH bolted to the door and escorted them personally into the reception.

After shaking hands and posing for photos with the women, Humphrey announced he had a gift for them. Reaching into his pocket, he pulled out a fistful of brass "HHH" pins that fastened to clothing with a removable butterfly clutch.

"These are our special campaign pins we give special friends," Humphrey told the flight attendants, "and I would like to give one to each of you!" The first giggling stewardess reached out her hand to receive the gift. Humphrey ignored her outstretched palm and said, "Here, let me pin it on you!" With the practiced speed of a teenage boy in the backseat of an old Buick, Humphrey slid his hand down and inside the young woman's blouse while he fastened the pin clasp. The startled stewardess blushed through saucer-sized eyes, but her giggling smile never wavered. Some onlookers chuckled while others exchanged nervous glances. HHH ignored both his whispering aide and the potential social breach as he moved down the line, pinning each attendant's top with intimate, unfettered gusto.

As Humphrey fastened the last pin, someone in the crowd called out, "Muriel [Mrs. Humphrey] will give you hell for this!" Humphrey ignored the crack and completed the task. As the last flushed attendant straightened her disheveled blouse, Humphrey looked over at Pat and me and gave us a wink. "Ahh," he exclaimed with a grin, "the joys of running for president!"

[Author's note: what got edited out of the story (for brevity) is what happened next: I walked up to him, shook his hand, and said, "You know, Senator, you were the envy of every guy in this room a minute ago." Then, with a grin, I leaned in and whispered, "And if you give me one of those HHH pins for my collection, I'll keep my mouth shut!" Humphrey looked down at me, smiled, and then reached into his pocket. The little brass pin in the photo is the one I still treasure from that long-ago night.] 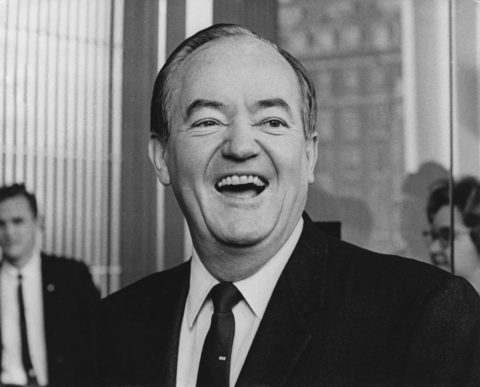