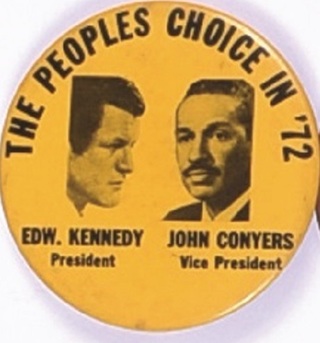 My former colleague on the House Judiciary Committee during the Clinton impeachment, John Conyers (D-MI)--the founder of the Congressional Black Caucus--died this morning at age 90. After serving almost 53 years in Congress (1965-2017), he resigned two years ago under unhappy circumstances relating to previous sexual harassment allegations.

Despite our vast political differences, I had a wonderful relationship with John, which I related in my 2011 book, "Catching Our Flag: Behind the Scenes of a Presidential Impeachment." It showed how my boyhood hobby of collecting political memorabilia created a friendship between us. The story is excerpted below:

In the world of veteran congressmen, they just didn't come much grumpier than John Conyers.

Republicans disliked the cranky senior Democrat on the Judiciary Committee, and the feelings appeared to be mutual. First elected to the House in 1964, the 69-year-old Michigan liberal knew that the only thing now standing between him and the chairman's gavel was a switch of six Republican House seats to the Democratic column. John waited a long time for this chairmanship, so it wasn't surprising that he brushed off Republican gatecrashers responsible for displacing him.

None of that mattered to me. As a teenager, I sat spellbound watching the 1973-1974 televised Judiciary Committee impeachment hearings against President Nixon. Now, 24 years later, John remained the last Watergate member still serving on the committee. As a lifelong political junkie, I longed to hear him share his first-hand account of that historic period. Yet whenever I tried talking to him, he offered me little more than a discontented grunt.

I formulated a plan to crack through his unresponsiveness. Having collected old political campaign memorabilia since the age of ten, I knew from experience that most politicians never save their own campaign items, and years later they regret it. While serving in my state legislature, I created a wealth of bipartisan goodwill giving colleagues items from my collection. Determined to find an icebreaker with John, I rummaged through my collection for a relation-building opportunity.

The next time I saw John sitting alone on the House floor, I invited myself to join him. Before he could run me off, I asked if he remembered doing a campaign rally with Senator Edward Kennedy in Michigan almost 30 years earlier. He said he had thought about it just the other day: "This was back when everyone believed Ted Kennedy would be the next president," John said. "It was the biggest rally I ever had in my district!" I asked John if he remembered seeing yellow campaign badges there with the legend, "The People's Choice in 1972: Edward Kennedy for President - John Conyers for Vice President."

"I remember those badges!" John said excitedly. "In fact, I wanted my staff to save me one, but they never did."

Before John could ask his next obvious question ("How do you know about that badge?"), I reached into my pocket. "I saved one for you, John." Pressing the badge into his hand, I smiled and walked away.

John's later kindness toward me caused more than a few raised eyebrows at my maiden appearance as a member of the House Judiciary Committee [after the Monica Lewinsky story broke and the nation geared up for a possible presidential impeachment--partisan tensions were already at the breaking point by this time]. On March 3, 1998, Lindsey Graham (R-SC), another new committee member, and I attended our first hearing. As the senior Republican, Chairman Hyde drew the duty of making the welcome speech for Lindsey and me. After Henry finished and then called up the first bill, John Conyers interrupted unexpectedly: "Mr. Chairman, will you yield to me?"

Everyone looked around nervously. "Here it comes," remarked a congressman seated behind me. Republicans hunkered down for another Conyers partisan tirade. Instead, jaws dropped as John made a lovely speech embracing my membership on Judiciary. As he extolled my virtues, Republican members began eyeing me suspiciously. Even Henry looked baffled. To make things worse, after John finished praising me, he gazed icily at Lindsey and remarked, "Mr. Chairman, I yield back the balance of my time."