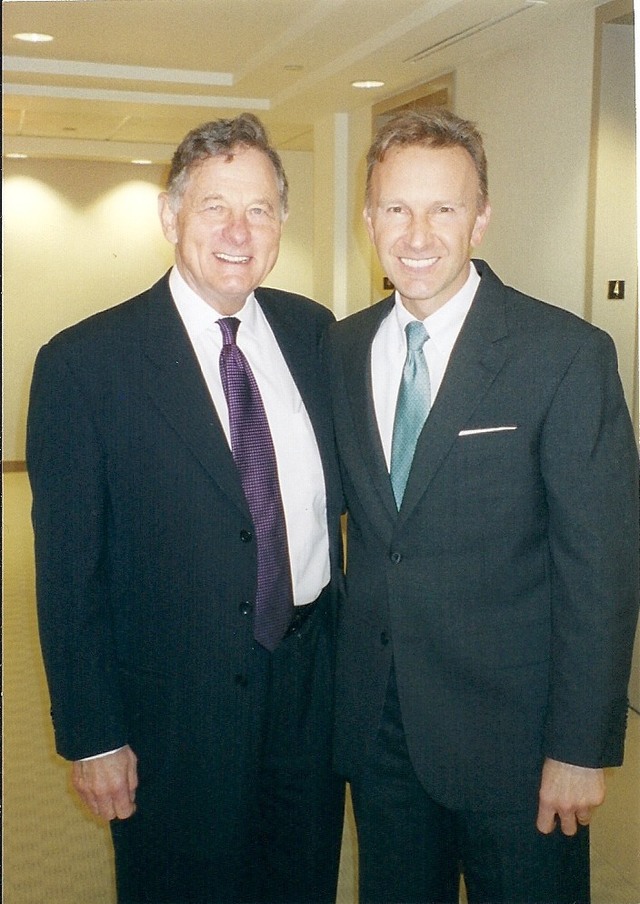 News of Birch's death leaves me deeply saddened. It might seem odd that a conservative former GOP congressman would mourn (in the eyes of most other conservatives) a liberal bogeyman, but I do.

In 2001, a couple of months after I left Congress and became a partner in the Maryland-based law firm of Venable LLP, I was asked to help form a government relations practice. As I sifted through resumes, one came across my desk that caught my eye—former Senator Birch Bayh, who was by then out of office for two decades, in his mid-70s, and desirous of leaving his current law firm and joining us.

We set up a "meet-and-greet" breakfast for him, which was very pleasant but somewhat formal. It was a chance for a few of my partners to get a feel for whether we wanted to pursue further discussions with the former lawmaker, and for him to size up our firm. All went well that morning, but when breakfast was over, he approached me and asked if we might meet privately before he left. I invited him to my office down the hall.

We sat alone and he said to me, "Congressman, may I be candid with you? I know you are a hard-core conservative, and you know that I am a hard-core liberal. I'm also an old man, so I am asking you to do me a personal favor. If you plan to veto my joining the firm because of our political disagreements, would you be kind enough to tell me right now? At my age I really don't want to go through a series of interviews with the other practice groups if it is all going to be for nothing. I won't take it personally, and in fact, I would respect your position if that is what you feel you need to do."

"Senator," I replied, "I don't know why, but for some reason I had a feeling that might be a concern for you. Maybe this will answer your question." I opened my desk drawer, retrieved a manila envelope, and handed it to him. He opened it and pulled out a dark Kodak snapshot (dark because the flashbulb failed) from August 1971 – – 30 years earlier. It was a photograph taken of him signing an autograph for me when I was in junior high school. Also in the envelope was a letter he had written me 30 years earlier thanking me for my interest in his upcoming presidential campaign, and sending me an autographed photograph.

"Birch," I smiled, "I'm your original fan! Does that answer your question?"

Birch stood up, came around my desk, and threw a bear hug around me. From that moment, we were the best of friends. We hired Birch, he became my law partner, and I was thrilled when he asked to have the office directly next to mine.

In time, the firm wanted to separate our offices, because whenever he and I didn't feel like billing hours (which was often), we would wander into each others' offices and talk about politics—especially the politics of the tumultuous 1960s. Almost always Birch did the talking and I was his eager listener and student.

Far too many times I wandered into Birch's office, plopped down on his couch, and threw out questions such as, "Hey Birch, when you were first running for the Senate in 1962 and John F. Kennedy came out to campaign for you in Indiana, and then he cut short his appearance because he said he had a cold and flew back to Washington, did you have any inkling that he was really heading back because he had gotten word that the Soviets had put missiles in Cuba at the start of the Cuban Missile Crisis?" Then I would sit back for the next couple of hours and listen to Birch regale me with stories, all of which I loved and absorbed.

During our time together Birch was a fountain of political history, and I relished his first-person accounts of Truman, Eisenhower, Kennedy, Johnson, Nixon, Ford, Reagan, Bush, Hubert Humphrey, Everett Dirksen--the yarns were endless, and so was my delight.

Christine and I moved home to California 15 years ago. I stayed in touch with Birch for many years, but as he grew older the contacts became less frequent. When he died this week, all of my memories of that warm, friendly, and lovable Hoosier flooded back. Regardless of party, America lost a gifted and tenacious legislator, and a patriot who loved his country deeply.

And I lost a pal. Requiescat in pace.