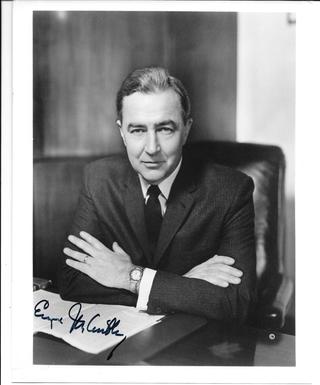 (Excerpted from James Rogan's 2018 book, On to Chicago: Rediscovering Robert F. Kennedy and the Lost Campaign of 1968)

It was supposed to be easy.

By late 1967, with the Vietnam War raging for over three years, antiwar activists sought to recruit an intraparty challenger to the incumbent president they blamed for the conflict, Democrat Lyndon B. Johnson, in his expected 1968 re-election bid. Their favored candidate to take on Johnson for renomination, Sen. Robert F. Kennedy (brother of the slain president and the man who selected Johnson as his vice president in 1960) repeatedly refused to run, telling advisers LBJ was unbeatable. After burning through a list of second-string potential challengers – all of whom turned down their entreaties – the activists found only one taker – Eugene McCarthy, a virtually unknown U.S. Senate backbencher who preferred writing poetry to the glad-handing world of politics.

McCarthy's candidacy drew a yawn from the political establishment. Demonstrating his nonconformist reputation at his announcement press conference, when a reporter asked why he wanted to be president, McCarthy corrected him: "I didn't say I wanted to be president. I'm willing to be president." Taken aback by that answer, another reporter asked what kind of president he would make. McCarthy replied, "Oh, I'd be adequate." During the lead-up to his first primary confrontation with LBJ, McCarthy's most favorable poll showed the president clobbering him 3-to-1 (one poll showed LBJ drubbing him 10-to-1).

Still, there was attraction to McCarthy's unconventional style. During his six week seemingly impossible New Hampshire primary race, college students across America drawn to his antiwar message and his aura of integrity hitchhiked or rode buses to the Granite State to volunteer. On primary day, McCarthy rocked the establishment by coming within 200 votes of outpolling Johnson statewide.

During the preceding weeks, Robert Kennedy and his team never viewed McCarthy as a serious contender. They believed, along with most others, that McCarthy could never provide Johnson any meaningful opposition. Besides, according to Kennedy senior campaign aide Richard Goodwin, they all knew that if Kennedy later changed his mind and entered the race, McCarthy would step aside for him. After the New Hampshire shock, and with LBJ stripped of his invincibility cloak, Kennedy reversed course and jumped into the race for the Democratic nomination. McCarthy, who challenged Goliath when nobody else would, refused to yield. His supporters viewed Kennedy's earlier and repeated refusals to run against Johnson as cowardly, and his sudden entry following their man's stunner as an opportunistic and selfish act guaranteeing to split the peace vote.

A second political shock came two weeks after New Hampshire. Facing more humiliation from a likely outright win over him by McCarthy in the upcoming Wisconsin primary, Johnson announced he would not seek re-election. This set the stage for Vice President Hubert Humphrey's entry into the race a month later as the administration's Vietnam defender. Since Humphrey declared too late to file for any primary, Kennedy and McCarthy scrambled for votes in those handful of states selecting delegates in the 1968 primaries.

According to historian Theodore H. White, Kennedy's strategy was to blitz McCarthy in the primaries but avoid attacking him personally. This created a conundrum: Privately, Kennedy detested McCarthy and felt him unfit to be president, but he feared attacking McCarthy would alienate the thousands of young people who already rallied to his cause. Kennedy needed those "McCarthy kids" in his corner once he dispatched "Clean Gene." Kennedy hoped that by rolling over McCarthy comfortably in every primary, he could win enough delegates to make the argument at Chicago's Democratic National Convention in August that he, not McCarthy or Humphrey, was the more electable nominee.

Over the next two months Kennedy and McCarthy battled their way across the primary map. They faced off first in Indiana on May 7, where Kennedy beat McCarthy, but he did so with an unimpressive 42 percent in a three-man race – and that was after McCarthy pulled out of the state completely. The same thing happened in Nebraska a week later: Kennedy poured in huge amounts of time and money, McCarthy spent one day campaigning there, and Kennedy barely cleared 50 percent. The Kennedy team tried to put a game face on their modest Nebraska margin – aide Pierre Salinger spun their 51.5 percent majority as proof that McCarthy's candidacy was not "credible." But inside their campaign bubble Kennedy forces knew the opportunity for a knockout was diminishing. It was the next primary, Oregon, where Kennedy needed to flatten McCarthy to end his effort.

And so, 50 years ago today, May 28, 1968, Oregon Democrats voted. When the dust settled, it was McCarthy who walloped Kennedy by 6 points, thereby derailing Kennedy's blitz strategy. The surprising loss also unnerved Kennedy's pride – Oregon made RFK the first Kennedy ever to lose an election, which galled the competitive candidate greatly.

With his two unimpressive victories, and then a sobering defeat in Oregon, a chastened Kennedy privately told his staff that if he lost the next big primary the following week he would drop out of the race. All eyes thus turned to California, where the warfare between Kennedy and McCarthy grew increasingly hostile right up to that fateful election night, June 4, 1968.

What was the ultimate impact of this make-or-break California primary on both the 1968 presidential campaign and on history? I will offer a reflection on that topic one week from today – on the 50th anniversary of that epic race.