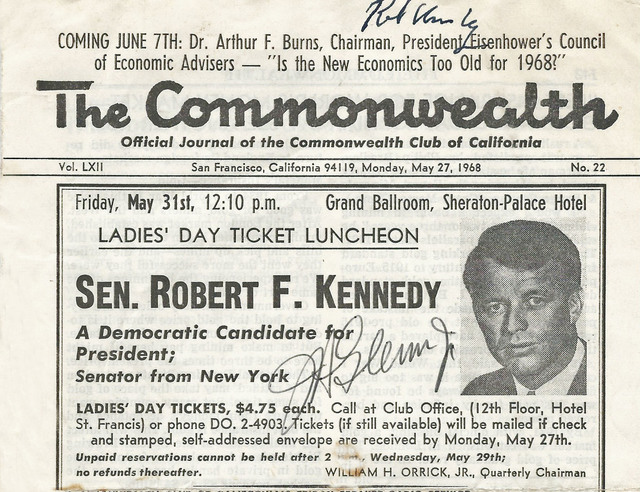 Four days before his assassination, Senator Robert F. Kennedy signed this program after addressing the members of the San Francisco Commonwealth Club during his ill-fated presidential campaign, May 31, 1968 (James Rogan Collection)

Robert Kennedy: The man, the myth, the truth

Each generation produces a handful of universally known political figures who arouse deep-seated love or blinding disdain, and with almost no middle ground between either passion. In my grandparents' day, it was Franklin D. Roosevelt: People loved him or hated him, but very few had no opinion of him. One might argue today that the names Donald Trump and Hillary Clinton provoke the same polarized feelings. During my boyhood, there wasn't one or two such leaders – there were eight, and they all squared off against each other in the 1968 presidential campaign. Those to whom public indifference failed to attach back then were Lyndon Johnson, Richard Nixon, Ronald Reagan, George Wallace, Nelson Rockefeller, Hubert Humphrey, Eugene McCarthy and the charismatic young candidate whose murder that year shielded him from the continued harsh spotlight of contemporary scrutiny and into the realm of martyrdom and legend.

That final metamorphosis began 50 years ago today, March 16, 1968, when Sen. Robert F. Kennedy announced his candidacy for the presidency of the United States.

RFK for president – you had to be there to understand the excitement he ignited. As a San Francisco boy growing up in the 1960s in a blue-collar, part-Irish and all-Roman Catholic family, John and Robert Kennedy were heroes to our generation of immigrant and denominational descendants. We admired them in life and mourned them in death – deeply. I was too young to remember Jack Kennedy's 1960 race, but I was all over Bobby Kennedy's 1968 drive for the White House. Although only in the fifth grade, I followed it with the same enthusiasm other boys my age reserved for that day's baseball standings. His landmark campaign for the Democratic presidential nomination against Sen. Eugene McCarthy infused me with such an intense interest in history and government that it led to my own eventual path into law and politics.

The excitement of Kennedy's battle, and then the horrible violence that ended it instantly the very night he beat McCarthy in their hard-fought California primary, left a profound impact on me that never waned. Decades later, during my service as a Republican congressman, I still held Kennedy in awe – a sentiment no other conservative House colleague apparently shared. In 1998, Rep. Joseph P. Kennedy III, D-Mass., and I co-sponsored a bill to name the U.S. Department of Justice building after his late father. Republicans killed the bill in committee. Thirty years after RFK's death, his memory still aroused so much GOP disdain that they would not have named the DOJ outhouse after him. When I tried raising the issue with Speaker Newt Gingrich directly, he cut me off. "That bill is dead – dead," he snapped irritably. Later, when my friend Lyn Nofziger, Ronald Reagan's longtime spokesman and adviser, visited my Capitol Hill office, I saw him staring at a large autographed photo of Bobby Kennedy hanging on my wall. Turning to me and looking both confused and disgusted, he asked, "What the hell is that thing doing here?"

This leads to my next point: Fascination does not cause blindness.

Like two other supermen with whom he shared the crowded stage in 1968, Robert Kennedy shares a common fate with Lyndon Johnson and Richard Nixon: over the ensuing decades all three have been the subject of countless biographies teeming with pseudo-psychological interpretations of what made them tick. Here the comparison ends. With LBJ and Nixon, the pop-culture consensus is that their power-grasping temperaments sprang from sinister motives and deep-seated personal inferiorities. Bobby's biographers usually promote loftier interpretations. For example, Arthur Schlesinger softened for history Bobby's hard-edged, knee-to-the-groin political style, writing, "Because he wanted to get things done, because he was often impatient and combative, because he felt simply and cared deeply, he made his share of mistakes, and enemies. He was a romantic and an idealist. …"

Romance and idealism aside, many of RFK's ardent supporters never knew, or chose to ignore, that Bobby started his political career in the 1950s as one of the lead investigators for Sen. Joseph McCarthy, whose last name became – fairly or unfairly – a synonym for reckless and career-destroying witch hunts. After leaving McCarthy's staff, Bobby became chief counsel to the Senate committee investigating labor union racketeering. He dragged in over 1,500 witnesses before the committee in a vendetta to "get" those he perceived as enemies, especially Teamster leader Jimmy Hoffa – an obsession that carried over into his tenure as President John F. Kennedy's attorney general. During Bobby's stint at the Justice Department, he supported covert foreign assassinations and coups. He ordered wiretaps on enemies and friends alike, including Dr. Martin Luther King Jr., whom he knew cavorted with communists. Incidentally, these wiretaps disclosed King's many marital infidelities, which FBI agents later used to harass and threaten King. Revisionist histories notwithstanding, Attorney General Robert Kennedy did not champion the cause of Southern civil rights marchers – he viewed them as irritants creating escalating nuisances to his brother's 1964 re-election prospects. Right up to the end of his life, in private conversations, sometimes he used ethnic vulgarities when talking about blacks and Jews.

Instead, RFK's post-assassination biographers overwhelmingly offer a more forgiving explanation – his brother's 1963 assassination changed Bobby Kennedy. Dallas supposedly transfigured him from vicious street-fighter into Greek tragedian: deeper, sensitive, selfless. Bobby helped in this rehabilitation by peppering his post-JFK era speeches and interviews with quotations from Camus, Emerson and Aeschylus. He dined with poets, strikers and migrant workers. He walked the ghettos. Those perpetuating the RFK myth excuse his calculated back flips on Vietnam. This renovated RFK meets us in history books as one who "grew" in his opposition when he saw an unjust war and its aftermath, and upon whom fate forced leadership, which he accepted for duty, not ambition.

The truth: Robert Kennedy, both before and after his brother's death, was a calculating politician who fought dirty, played for keeps and (when politically expedient) took various sides of an issue to please specific and often conflicting interest groups. Strip Bobby Kennedy of the sentimental hogwash that bathes his memory and we find that he and his brother had the same cunning ambitions and methods as their non-idealized counterparts. We forgive the Kennedys, but not the graceless LBJ or the sweat-beaded and shifty-eyed Nixon, because the Kennedys had a cultured, smooth veneer when cutting an opponent's throat.

Doubtless Dallas and its aftermath changed Robert Kennedy. All the evidence suggests that Bobby did become more soulful, patient, thoughtful and empathetic for the underclass, but his darker political side never wandered far. Of Bobby's 1968 opponents – Lyndon Johnson, Hubert Humphrey, Richard Nixon, Nelson Rockefeller, George Wallace, Ronald Reagan, Eugene McCarthy, George Romney – if any were alive today, they would tell you that RFK understood the family business perhaps better than any other member of his clan. When Bobby fought you on the political battlefield, he fought to win, and if that meant leaving your corpse rotting in the dust, tough luck.

Still, RFK represented more than a political contender. To millions he was their voice and, more importantly, their hope – a symbolic resurrection from that cruel Dallas motorcade five years earlier. One need not have been a Camelot sentimentalist to have shared the grief at his own violent death.

His frenetic 85-day campaign for the presidency proved all the more Shakespearean when his neurosurgeon later reported that if the fatal shot had struck just one centimeter to the right, Bobby would have recovered and resumed his campaign. Because it did not he died at age 42, leaving a pregnant widow, 10 young children and a gaping hole in American history.

Many of us old enough to remember that tragic night have defaulted repeatedly over the years to the question that still haunts: What if?

What if someone in that crowded pantry shouted a warning and Bobby flinched – even slightly? What if something – anything – had deviated that bullet's fatal trajectory? What if millions of voters didn't lose their hopes in a pool of blood on the pantry floor of a Los Angeles hotel? What if Bobby survived his wounds and finished his journey?

As we approach the 50 anniversary of RFK's death later this June, these thoughts remind us, ever so painfully, of the poet's lament: "For of all sad words of tongue or pen, the saddest are these – It might have been."