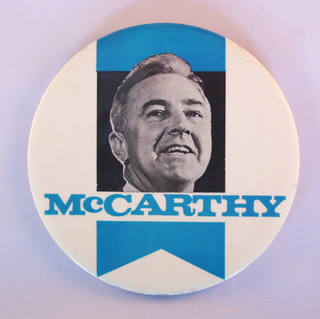 Ralph Pill left a filthy mess when he vacated the old three-story red brick building that formerly housed his electrical supply company in Concord, New Hampshire. In early January 1968, two anti-Vietnam War activists rented it for $100 a month. They entered to find rats, rubbish piles, wooden boards covering floor holes, exposed plumbing pipes and bare lightbulbs hanging from ceiling cords. They began by sweeping up the trash. Six weeks later, with their purpose completed, they had helped topple a president of the United States, and also set in motion the founding of the Democratic Party's modern progressive movement.

And it all happened 50 years ago today.

On Nov. 30, 1967, an almost-unknown U.S. senator with no funding or organizational base, Eugene McCarthy, announced he would challenge incumbent President Lyndon B. Johnson for the 1968 Democratic Party nomination. McCarthy chose New Hampshire, the first-in-the-nation primary, as the place where he would make his opening stand against LBJ. The quirky senator who preferred writing poetry to the grubby world of politics seemed an unlikely giant killer. Johnson held a monopoly on New Hampshire Democratic Party endorsements, including the governor, the U.S. senator and every noteworthy official. Aside from some low-level peacenik officeholders, McCarthy at first had little more than a small coterie of volunteers backing his antiwar endeavor, but the challenger soon caught a couple of unexpected breaks.

The first opening came on Jan. 31, when communist North Vietnam violated an agreed-upon cease-fire with U.S.-backed South Vietnam on "Tet," the Vietnamese new year. Seventy thousand Northern communists and their Vietcong allies launched surprise attacks against the U.S. Embassy in Saigon and over 100 South Vietnamese cities. Although U.S. and South Vietnamese troops repelled the attackers with relative ease, it took over a month to drive back the enemy. Despite this victory, the three major U.S. networks highlighted the brutal fighting on their evening news broadcasts each night, which caused a major slide in continued public support for U.S. involvement in Vietnam.

Before Tet, a majority of Americans approved of Johnson's war policies. Two weeks after Tet, Gallup reported that 50 percent disapproved. When LBJ suggested that the Pentagon might draft an additional 200,000 young men to supplement the 500,000 U.S. troops already stationed in combat zones, draft-age college students responded. First a handful, and then dozens, and then hundreds, and finally thousands of them made their way to the Granite State. They cut their long hair, donned conservative clothing, and blanketed every New Hampshire precinct on McCarthy's behalf. The nationwide mobilization of students for liberal causes began with this 1968 McCarthy phenomenon – dubbed by the press back then as "The Children's Crusade."

From the man who led the effort to oust Bill Clinton from office, Rep. James Rogan's "Catching Our Flag: Behind the Scenes of a Presidential Impeachment"

Once Johnson's main potential competitor for the nomination, Sen. Robert F. Kennedy, announced he would not challenge LBJ for re-election (Kennedy told friends privately that Johnson was unbeatable), Johnson did not bother filing for the New Hampshire primary ballot. After McCarthy jumped into the race at the last minute, Johnson decided that filing would give the challenger credibility, so he again passed.

With LBJ not participating, the state's leading Democrat, Gov. King, resented that press attention focused on the Republican primary between Richard Nixon and George Romney. To bring some excitement to the Democrats' ledger, he initiated a formal write-in campaign for Johnson. King ordered printed tens of thousands of pledge cards, and he distributed them to every government employee and registered Democrat in the state. The three-part, serially numbered perforated cards, captioned, "N.H. Democrats are 90,000 Strong," were designed for the voter to sign an LBJ write-in pledge with their personal identifying information included. The card indicated that state party officials would collect and record the pledges, and then forward the data to the Johnson White House.

The pledge cards angered and offended thousands of recipients. Because the cards bore a serial number, many thought these were the actual primary ballots – violating the secrecy of their choice. Voters also resented providing their names and addresses on pledge cards going to state and national party officials who could track and (presumably) punish those balking. King aggravated these suspicions when he told the press the reason for the pledge cards: "Now is the time for Democrats to stand up and be counted – or be counted out."

The McCarthy campaign pounced. They nailed up posters around the state with a picture of the pledge card and the slogan "Whatever Happened to the Secret Ballot?" McCarthy said LBJ was using the pledge cards on voters the same way he used branding irons on his Texas cattle. He urged voters to reject this intimidation tactic and to show their independent spirit, reminding them that they need not pledge anything to his campaign. By primary day, thousands of those pledge cards had been returned to McCarthy's Concord campaign office – with Johnson's name scratched out and McCarthy's name written in.

And so, 50 years ago today, March 12, 1968, New Hampshire voted. The nonconformist senator expected to draw no more than 10 or 15 percent came within 200 votes of outpolling Johnson statewide. This sent shockwaves across the political establishment. With LBJ showing unexpected vulnerability, Robert Kennedy jumped into the race a few days later. McCarthy's furious supporters viewed Kennedy's last-minute entry as ruthless opportunism that threatened to split the peace vote – after they had done the heavy lifting against Johnson. They dubbed him "Bobby Come Lately," and their bitterness toward him lasted throughout the remaining state contests.

In the weeks following New Hampshire came Johnson's eventual withdrawal from the race, the entry of Vice President Hubert Humphrey, Kennedy's assassination, the bloody riots at the Democratic National Convention in Chicago and the fall campaign against Republican Richard Nixon and third-party candidate George Wallace. The long road that lay ahead all started in an abandoned, $100-a-month warehouse, which became Eugene McCarthy's campaign headquarters for the New Hampshire primary.

And so, if you ever stroll through downtown Concord, New Hampshire, pause for a moment at the old red brick building that still stands on the northeast corner of Main Street at 3 Pleasant Street Extension. It will probably be abandoned – just as it was 50 years ago when the McCarthy campaign assembled a political atom bomb within its walls. Be respectful as you walk by …

History was made there.