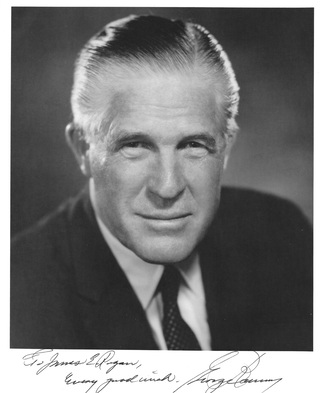 [Excerpted from James Rogan's book, On to Chicago: Rediscovering Robert F. Kennedy and the Lost Campaign of 1968]

Shortly before leaving for his fateful Dallas visit, President John F. Kennedy surveyed the field of potential Republican candidates who might challenge him for re-election in 1964. JFK dismissed any concerns over GOP powerhouses like former Vice President Richard Nixon, New York Gov. Nelson Rockefeller and U.S. Sen. Barry Goldwater. A single potential competitor, in JFK's estimation, threatened his 1964 prospects. "The one fellow I don't want to run against," he confided to a close friend, "is George Romney."

Kennedy had cause for his unease. Romney was the living embodiment of the Horatio Alger spirit: a devout former missionary from a poor family who never finished college and, as a young man, worked as a stenographer before landing an entry-level job in the automobile industry. Later moving into management, Romney worked his way up the corporate ladder to become chairman of the Board of American Motors. In 1962, as a political novice, he won the first of three terms as Michigan governor, and he was the only Republican candidate that year to win in the heavily Democratic state.

Lyndon Johnson became president following Kennedy's assassination, and Romney declined to seek the White House in 1964. That left liberal Rockefeller and conservative Goldwater to fight a nasty primary battle for the GOP nomination (after losing his 1962 California governor race, Nixon sat out a 1964 run). Johnson crushed eventual nominee Goldwater in a 44 state landslide.

By early 1967, after three years of Johnson blowing through billions of dollars on his "Great Society" welfare and social programs, as well as America suffering tens of thousands of casualties in LBJ's floundering Vietnam War escalation, the GOP saw their opportunity to retake the White House in 1968. However, the two best-known Republicans most often mentioned as likely contenders had significant electability problems. In 1964 an embittered Rockefeller infuriated GOP conservatives when he refused to endorse Goldwater against Johnson in the general election, and their ire still raged. Republican regulars liked and respected Nixon for his party loyalty and strong anti-communist credentials, but he had not won an election in his own right since 1950, and after two successive defeats, the "loser" image dogged him. The Republicans were in no mood for another fumbled White House run – they wanted a winner against Johnson.

Romney's increasingly impressive 1964 and 1966 re-election victories in a solidly blue state made him the early favorite for the GOP presidential nomination. Rockefeller endorsed him, and Romney's strong support among independents, ethnics and blue-collar voters gave him a broad crossover appeal. Beyond that, Romney held an irresistible hand: polls showed him as the only potential Republican challenger beating Lyndon Johnson.

And so, 50 years ago today, on Nov. 18, 1967, George Romney announced his candidacy for the presidency of the United States.

As it turned out, early assessments of Romney's electoral prowess, and Kennedy's previous anxiety about him, proved premature. In one of the most hapless campaigns on record, the Romney for President juggernaut set a record for implosion.

Throughout most of 1967, with Rockefeller not running and Nixon taking a half-year moratorium from all politics, Romney held the national stage – and the media's bullseye – alone. Despite his experience in the business world and his Michigan successes, he was unprepared in dealing with the heightened scrutiny that attended his front-runner status. When his interviews demonstrated that he had not mastered the various issues with which a potential president must be conversant, the national press corps portrayed him as an empty suit. Reporters delighted in magnifying each gaffe he made on the campaign trail. However, no media exaggeration was necessary when it came to reporting on Romney's self-inflicted fatal wound.

In an interview with a local reporter, when asked why he had moderated his position on Vietnam and had become more skeptical of America's role in the war, Romney declared that during his last visit there he had received "the greatest brainwashing that anybody can get when you go over to Vietnam. Not only by the generals, but also by the diplomatic corps over there, and they do a very thorough job."

With the Soviet Union and Red China expanding their international communist threat to America's security, nobody wanted a weak-minded president susceptible to brainwashing, or so the argument went. In a rare act of clemency, the press gave Romney a chance to walk back his comment by asking if he had been misquoted or misunderstood. Instead of grabbing the life preserver, he doubled-down stubbornly and insisted, "Yes, I was brainwashed. We're all brainwashed. The [Johnson] administration simply does not tell us the truth about Vietnam. ... I'm glad I used that word. It woke up the country. Nobody was paying any attention when I only used words like 'snow job.'"

The fallout came quickly. Editorial cartoonists depicted a befuddled or glassy-eyed Romney with soapsuds covering his noggin. Newspapers that had been his strongest supporters now called on him to drop out of the race. The most devastating comment came from Democratic presidential aspirant Eugene McCarthy, who, when asked about Romney's ill-advised statement, suggested that the intellectually challenged Romney didn't need a full brainwashing when "a light rinse" would have done the job.

Romney descended rapidly from serious contender to object of ridicule, and the daggers in his back proved bipartisan. Despite Rockefeller's continued public expressions of support (and Rocky's repeated private insistence that Romney not drop out of the race as the beleaguered candidate now begged to do), Rocky undercut his man repeatedly. Rocky told the press several times that he would be pleased to accept the GOP nomination if the convention drafted him, and he made gratuitously hurtful public comments on Romney's travails. When a reporter asked Rocky to explain Romney's string of bloopers, he replied with a laugh, "I don't know – go ask a psychiatrist."

Humiliated, Romney euthanized his own campaign three days before the first-in-the-nation New Hampshire primary. His last-minute withdrawal infuriated Nixon privately, who had hoped to beat back his loser image by shredding Romney in New Hampshire and in the later primaries in which they were competing. When told on the eve of their first showdown that Romney had quit, Nixon grumbled that Romney's exit had cheated him out of his earned triumph. "That's just like a businessman," Nixon fumed to an aide. "No guts."

After winning the White House in 1968, President Nixon named Romney to his Cabinet as secretary of housing and urban development, where he served for four years before retiring to private life, charitable work and church activities. Stricken by a heart attack while doing his morning treadmill exercise, he died at age 88 on July 26, 1995. His son, former Massachusetts Gov. Mitt Romney, partially avenged his father's 1968 loss by winning the 2012 Republican presidential nomination.

Although his White House candidacy proved short-lived, George Romney's entry into the presidential sweepstakes fired off the starting gun for the historic and fateful 1968 campaign. He helped set the stage for Richard Nixon's unlikely and dramatic comeback in a race that may have been our nation's most divisive, bitter and bloody – and one that clearly changed permanently the arc of American history and politics.