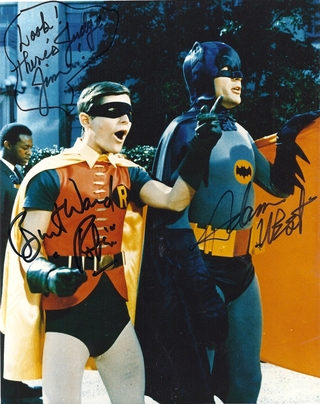 On the evening of January 12, 1966, every kid in my third grade class waited anxiously to tune in on prime time television to the ABC Network. On that night, "Batman" premiered, starring Adam West and Burt Ward. Originally, the show aired two nights a week; the first episode always ended in a cliffhanger. The morning after the initial story aired, much schoolyard recess time was expended recapping the excitement of last night's adventure, while also speculating about how the Dynamic Duo might escape what appeared to be certain doom.

Fifty years later, I still love the show--as do my daughters, and as will future generations. The great morality and responsibility that Batman and Robin taught--obey the law, be a good citizen, listen to your parents, do your homework--is sadly missing from much of the trash that passes for youthful television entertainment today.

I had the chance to meet Adam and Burt a couple of times when I was in the state legislature and they visited my district for a fan show. Adam was very interested in my own experiences as a "crime-fighting" Los Angeles County Deputy District Attorney, and also the cases I heard as a municipal court judge. At one such meeting, they signed this photo for me, which I still treasure.

Adam West died this week at age 88. May he rest in peace. Through their show, he and Burt are still teaching the next generation of young fans the rules of good citizenship and exemplary service.