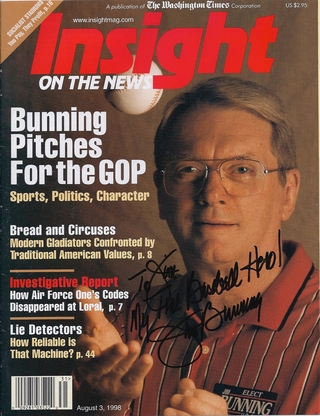 One day my wife Christine, our girls, and I were shopping at a mall in Northern Virginia. While they poked around in a clothing store, I wandered over to a sports memorabilia shop. There I saw in a glass case old baseball and football player cards for sale. On the top shelf of the display case, side-by-side, were cards for both Jim and Steve. I decided to buy them and have my colleagues autograph them for me.

The next day I saw Jim sitting alone in the House chamber. I sidled up to him and asked that he sign my baseball card. As he got out his pen, he asked where I found it. I told him that coincidentally I found one for both him and Largent side-by-side at a memorabilia store, and that I bought them both. Jim asked me how much they cost.

"I got a deal on them because I bought both."

"That's great. How much did you pay?"

"Well," I told him, "I asked the shopkeeper how much he wanted for the Largent card. He quoted a price of $10."

"So how much was mine?" Jim asked.

"That's the best part of the story!" I told him grinning. "The owner told me if I bought the Largent card, he'd throw in yours for free!"

I should have held back that answer, which came just as Jim's pen was about to make contact with the card. He looked up, replied to me in a way that I need not repeat here, flung the card onto my lap, and stormed away in a huff.

I had to wait a couple of years until Jim was in the Senate and I was involved in the Clinton impeachment (which redeemed me in his eyes) to get that card signed.

Jim died today at age 85 from complications after sufferiing a stroke. He was 85.