In Memory of John Glenn

In memory of one of America's great space heroes, John Glenn, who died today at age 95.

When I first met him over forty years ago as a teenage fan, I never dreamed one day I would come to know him when we served together in Congress, and in later years. 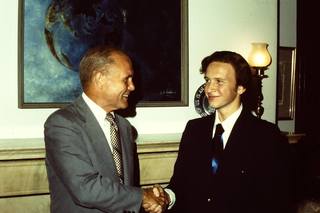 Newly-elected Senator John Glenn and me, 1975 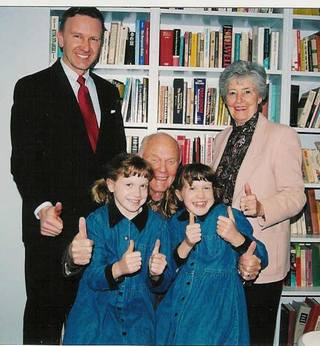 John and Annie Glenn with Dana and Claire Rogan, along with their dad, 2003

This photo of us in tuxedos and at dinner shows me beginning to tell him that President Bush wanted me to collect the control stick from John's 1962 spacecraft Friendship 7 (John told me earlier he kept as a souvenir). I told him that the attorney general wanted it back, or else they'd swear out a warrant for him removing government property! I thought he was going to choke on his rubber chicken dinner before he realized I was just kidding him...