As a fifth grade student, my interest in politics and government coincided with that year's 1968 presidential campaign. I followed the primary races, the national nominating conventions, and the lead-up to Election Day with the same level of enthusiasm that most boys give to major sporting events. In what ended up as one of the closest elections in American history, the Republican ticket of former Vice President Richard Nixon and Maryland Governor Spiro Agnew defeated the Democratic nominees, Vice President Hubert Humphrey and Senator Edmund Muskie. Although a virtual unknown at the time Humphrey selected him as his running mate, Muskie developed a strong national following for his calm and steady demeanor in a year that exhausted the electorate from months of tumult and ongoing overseas war. Following their loss to Nixon, as the national Democrats regrouped and assessed their situation, many saw Muskie as the perfect presidential candidate to carry their banner against President Nixon four years later.

Born in 1914, Muskie served in the Navy during World War II. After the war, he returned to his native Maine, where he won a seat in the state legislature. In 1954 he became the state's first Democrat governor in 100 years. In 1959, voters sent him to the U.S. Senate.

Following his nearly-successful vice presidential campaign in 1968, by late 1971 and early 1972, Muskie rode high in the presidential preference polls, and he held steady leads over all potential rivals. He declared his candidacy on January 4, 1972.  When he brought his campaign to San Francisco for a fund-raising event the following month, he remained the man to beat.

On February 22, 1972, while indulging our youthful passion for politics, my younger brother Pat and I rode the bus into downtown San Francisco. We walked up Nob Hill to the Fairmont Hotel with a plan to sneak into Muskie's big fundraising dinner and try meeting the man who might be the next president. With tickets for the event priced at $250 (the equivalent of $1,600 in 2022), and at age 14, crashing the party offered my only chance of attending.

We waited outside the hotel's main entrance for a couple of hours on that blustery evening. At 7:30 p.m., a line of cars pulled into the main driveway. Flanked by a few aides, Muskie climbed out of the lead car and headed for the entrance. 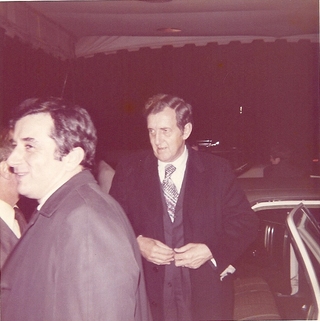 I snapped this picture of Senator Muskie as he arrived at the Fairmont Hotel, February 22, 1972.

The candidate shook hands with Pat and me, and he invited us to walk with him through the lobby while he autographed a campaign pamphlet for me. He then boarded an elevator and went to his suite on the eighth floor to freshen up before the event. 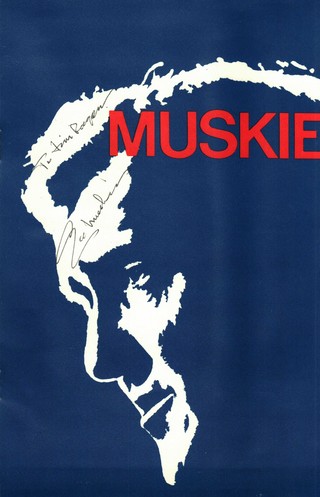 1972 Muskie campaign brochure inscribed for me by the candidate

Half an hour later, Muskie and his entourage returned to the lobby and walked to the hotel's Gold Room, the ballroom reserved for that night's big event. The waiting audience rose and cheered as he waved and shook hands on his way to a reserved table, where he joined his California campaign manager, former U.S. Trade Representative William Matson Roth. During the excitement caused by Muskie's arrival, Pat and I managed to sneak inside by walking briskly alongside Muskie's aides as they swept into the ballroom. Somehow, we eluded the otherwise watchful eyes of security guards posted at the doors.

We stood in the rear of the room trying to look inconspicuous while hoping to hear Muskie's speech before security detected our uninvited presence and ejected us. I almost blew my luck just before the formal program began when I walked over to Muskie's table and snapped a photo just as he shoved a forkful of salad into his mouth. An irate security guard rushed over, grabbed my arm, and shouted at me, "Don't come close to the senator again!"  before he released his grip. Counting myself lucky to have suffered only a stern admonishment and not a trespass arrest, I retreated to the corner of the ballroom, where Pat and I hid throughout the remainder of the evening. 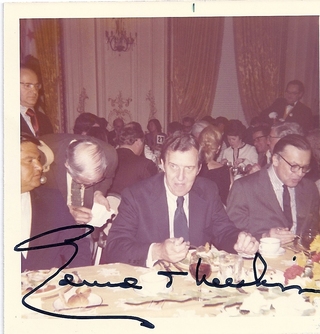 The offending picture: Muskie masticating his salad! He autographed this

later in the year.

We had not eaten anything since lunch nine hours earlier, so by now we had grown hungry. With just enough money for bus fare home, buying food was no option. We sauntered over to where the hotel waiters stacked their serving trays, and when nobody was looking, we filled our pockets with leftover dinner rolls.

We watched from our position in the back of the ballroom as Roth introduced Muskie, who received another standing ovation as he walked to the lectern to deliver a brief stump speech asking for support in his White House quest. 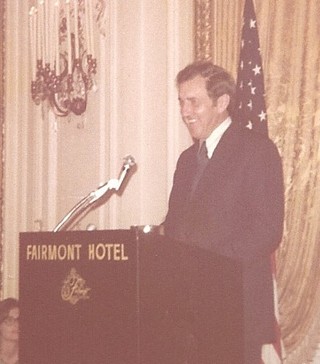 When he concluded, he posed for photographs with donors and signed autographs. As he and his party exited, he walked over to where Pat and I stood and again shook our hands. "Let's have a picture together," he said to me, and then he took my camera and handed it to his aide with directions to take one. 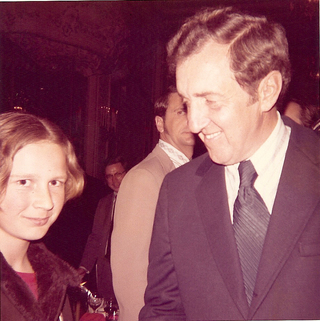 Waiters continued to clear the dishes while Pat and I collected the remainder of the campaign buttons left on the tables, each of which proclaimed, "President Muskie (Don't You Feel Better Already?)"  Meanwhile, Pat scooped up a unique souvenir: he took Muskie's dinner fork. 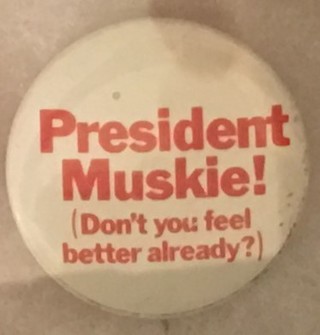 When I met Edmund Muskie that night at the Fairmont Hotel, his then-domination of the presidential preference polls was only hours away from derailment.  Four days later, he delivered a speech in New Hampshire that marked the beginning of the end of his White House aspirations. As reported in Britannica.com: "Mounting the bed of a truck parked outside the offices of the conservative Manchester Union Leader, [New Hampshire's] largest newspaper, Muskie launched an attack on the paper's publisher, William Loeb. As he spoke of Loeb's unflattering remarks about Mrs. Muskie, the senator's voice cracked, and the crowd saw tears form in his eyes. The spectacle badly dented the image Muskie had tried all year to present—that of a calm, trustworthy, serene candidate. When New Hampshire voted [in their presidential primary] on March 7, Muskie won the hollowest of victories, 46 percent of the vote, far below the predicted 65 percent. [Longshot Democratic presidential candidate George] McGovern, reaping the benefit of his early start and vigorous organization, was close behind with 37 percent." https://www.britannica.com/event/United-States-presidential-election-of-1972

Fifty years after meeting Muskie in San Francisco, I still have the memorabilia from that night. If you want to see the salad fork, the next time you visit my brother Pat's home, you might try opening his kitchen utensil drawer.

After spending over 20 years in the Senate, Edmund Muskie resigned in 1980 to serve as President Jimmy Carter's Secretary of State. With Carter's defeat the following year, Muskie retired from elective office. He practiced law and remained active in governmental affairs. He died at age 81 of congestive heart failure on March 26, 1996.