Project Mercury first day postal cover canceled from the NASA launch site at Cape Canaveral, Florida, on February 20, 1962, 3:30 p.m., the precise moment of Glenn's reentry into earth's atmosphere and fourteen minutes before his splashdown in the ocean. He signed this for me during our dinner over forty years later.

Let your imagination take you back to the 1950s. You are a military pilot who flew combat missions during World War II and in Korea, and you live in an era when rocketry and missile technology remains primitive. A new government agency approaches you with a proposal:

They have designed a seven-foot-by-nine-foot metal container with only enough room inside for a man to squeeze into the coffin-tight compartment. They want to attach that capsule (with the man inside) atop a long-range missile designed for nuclear warheads, and then launch the missile into outer space. If the missile makes it that far, they hope to have the capsule break away, orbit the Earth repeatedly, reenter the atmosphere, and splash down into the ocean using pop-up parachutes. Of course, there are some problems. They have never sent a man into outer space, and they have no validated research available on how to do it and bring him back safely. Of their five previous missile tests, two of them failed on the launch pad and exploded into fireballs. Also, without any available medical testing, they worry that prolonged exposure to G-forces and zero gravity will crush his eyeballs or make them pop out of their sockets, as well as cause severe brain and skeletal damage. Mostly, they fret that the estimated 10,000-degree Fahrenheit reentry heat might vaporize both capsule and passenger. After explaining these multiple dangers, and in the interest of science and exploration, they ask you to climb into that glorified tin can atop the missile and let them light the fuse.

What kind of man would take such a catastrophe-beckoning gamble? 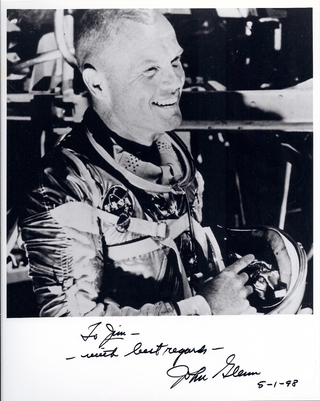 Born in 1921, as a Marine Corps pilot he flew fifty-nine combat missions during World War II, and ninety more in Korea. In 1959, NASA named him to its first group of astronauts, the Mercury 7. After two earlier launches completed successful suborbital flights, on February 20, 1962, he became the first American to orbit the Earth. His spaceship, Friendship 7, completed three revolutions in under five hours. Returning to a hero's welcome and tickertape parades, Ohio voters elected him to the U.S. Senate a dozen years later.

Glenn ranked as one of my earliest boyhood heroes. I wasn't yet five years old when he launched, but I still remember his death-defying, Buck Rogers-styled adventure. During his flight, I watched the live television coverage of his elderly mother waving at the sky as her son's capsule soared 162 miles above. When the TV newsman reported that in some cities people could view a glint from his spaceship as it passed, I begged my grandmother to bring me outside our San Francisco flat to see him sail across the heavens. As I stood on the sidewalk in front of 2718 Bryant Street holding Grandma's hand and staring upward, she never imagined that one day Little Jimmy would serve in Congress with the astronaut orbiting overhead.

When I made my first trip to Washington as a teen in 1975, rookie U.S. Senator John Glenn had arrived at the Capitol only eight months earlier. With no expectation of success, I wrote him and asked if I could drop by and meet him. To my delight, he said yes.

I arrived at his Senate office on a muggy afternoon and told his young and bubbly secretary that I was nervous about meeting her boss. "Relax," she said. "He's the nicest man in town. The word's already out among the staffers. They all want to work for him." After she led me into our meeting, I understood why.

He sat behind his desk reading a document when I entered. He looked up, removed his eyeglasses, and sprinted across the room to welcome me. Instead of having his aide rush me in and out for a perfunctory handshake and photo, he invited me to join him on the couch while he asked about my background and future ambitions (a paternal grin crossed his face when I told him I wanted to run for Congress someday).

After sharing with him my childhood recollections of his 1962 flight, he led me over to a table displaying a model of Friendship 7. "This is a 1/10 scale replica," he said, "which gives you an idea of how small the original was when it was flying over you and your grandmother."

"How did you ever fit inside?"

He laughed while pointing to his thinning hairline. "I don't know how I got in, but I think I lost a few hairs climbing out!" We walked over to the mantel over which hung an oil painting of Friendship 7 orbiting Earth. Moving his finger over the painting, he traced the course of his three orbits while describing its various stages for me.

"Were you ever afraid?" I asked.

He shrugged. "I had so many procedures and tasks to accomplish before and after the launch that I really didn't have much time to think about that. The one time I grew concerned was near the end of the flight. Our ground station received an alert that the heat shield on my capsule had come loose. If it fell off, the ship would burn up during reentry. In the original flight plan, I was supposed to jettison the capsule's retro-pack before reentry, but once they got the warning signal, NASA engineers told me to leave it in place. They hoped that it might help secure the heat shield if it were loose. As it turned out, the ground signal was faulty. The heat shield remained secure. Still, it was quite a sight watching chunks of that retro-pack burn off and fly by my small window during reentry."

He signed a few autographs, we posed together for a photo, and I left awed at spending over twenty minutes alone with an icon. He couldn't have been more gracious to a young fan who wasn't even a constituent.

Over twenty years later, when I joined him in Congress, I looked forward to telling him so. 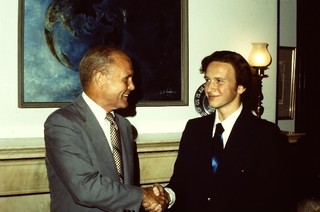 John Glenn and I posed for this photo in his Senate office in front of an oil painting depicting his 1962 Friendship 7 capsule orbiting Earth. He used this painting to illustrate his flight description for me, September 10, 1975 (Author's collection)

After leaving the Senate in 1999, John Glenn helped to educate future leaders through the John Glenn College for Public Service, as well as continuing his advocacy for America's space program. Awarded the Presidential Medal of Freedom in 2012, the last surviving member of the original Mercury 7 astronauts died at age 95 on December 8, 2016 from complications following a stroke. When Marine Corps pallbearers laid him to rest at Arlington National Cemetery, a nation in mourning recalled Scott Carpenter's 1962 prayer as Friendship 7 cleared the launch pad:

(The above was adapted from my book, "Shaking Hands With History.")