Fifty years ago tonight I took this snapshot of former Vice President Hubert H. Humphrey in the San Francisco Fairmont Hotel's Crystal Room before a group of stewardesses distracted him, March 24, 1972. He autographed this for me ("H.H. Humphrey") a couple of months later at another campaign event.  (Author's collection)

Writing this story five decades later, I am mindful that with each passing year Hubert Humphrey's name registers with fewer people. That was not true when I was young. A Washington heavyweight for decades, the former pharmacist and Minneapolis mayor first won election to the U.S. Senate in 1948. He ran unsuccessfully against John F. Kennedy for the 1960 Democrat presidential nomination, but four years later President Lyndon Johnson tapped him as his running mate. As the 1968 Democrat presidential nominee, Humphrey lost the White House to Richard Nixon by a whisker. After recapturing his old Senate seat two years later, and with the 1972 presidential campaign around the corner, he itched for a rematch with the Republican president.

When I was a boy, Humphrey was more than a politician to me. He was an early inspiration. As a fifth grader during his 1968 presidential run, I read a Life magazine profile on him. It told of his experience as a young Midwestern pharmacist making his first visit to 1930s Washington and the newfound passion for politics he found there. One night, after an exhilarating tour of the monuments, he rushed off an excited letter to his fiancée back home. After pleading with her not to laugh at him, he wrote that if he applied himself then maybe he could return one day as a congressman. She didn't laugh, they married, and along the way he helped shape almost every landmark law of his era. That magazine profile on HHH showed me that if an ordinary Midwestern druggist could accomplish such great things through politics, then maybe one day I could do the same. Once I connected those dots, I set my compass.

I was 14 when Humphrey entered the race for the 1972 Democratic presidential nomination. When I saw that he planned to make a daylong campaign swing through San Francisco on March 24, 1972, my younger brother Pat and I grabbed our cameras and waited for the candidate outside station KPIX, located at 2655 Van Ness Avenue, a busy street that cut through downtown. Pat and I each had pinned to our jackets two jumbo-sized Humphrey for president badges.

Humphrey exited the studio and waved to the small cheering crowd waiting for him. When he saw Pat and me wearing the oversized badges, he made a beeline straight for us while exclaiming, "Oh, boy! Am I for you!" I had brought a typescript quotation from one of his major 1968 campaign speeches for him to sign, but he went one better. Ignoring the increasingly frantic pleas of his Secret Service detail to return to the safety of his car, he led Pat and me (along with a parade of security agents and reporters) down to Filbert Street so that he could use the mailbox at the northwest corner as his writing desk.

He took several minutes to write out the quote in slow and careful longhand strokes. Unhappy and fidgety agents nervously watched the nearby rooftops, passing cars, and gathering spectators with good reason: Two weeks earlier, a would-be assassin pumped four bullets into Alabama Governor George Wallace as he campaigned for the presidency. Tossing aside safety concerns, HHH created what remains one of the sentimental favorites in my political memorabilia collection. 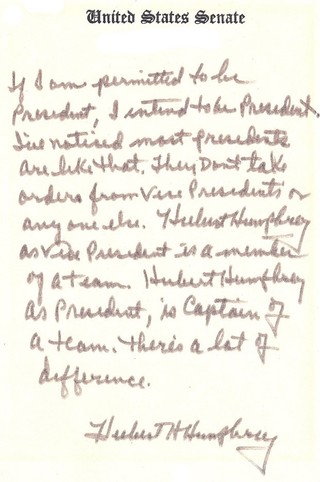 "If I am permitted to be president, I intend to be president. I've noticed most presidents are like that. They don't take orders from vice presidents or anyone else. Hubert Humphrey as vice president is a member of a team. Hubert Humphrey as president is captain of a team. There's a lot of difference. —Hubert H. Humphrey." HHH wrote out this quotation for me using a mailbox on a busy street corner while agitated Secret Service agents tried to hurry him along, March 24, 1972. (Author's collection)

Later that evening, Pat and I snuck into Humphrey's private reception for his California Democrat National Convention delegation slate in the Fairmont Hotel's Crystal Room. Near the end of his brief campaign speech, a group of young and pretty stewardesses staying at the hotel peeked inside the room and recognized him. Sheepishly, one of them asked a campaign aide if they could come in and meet the candidate. When Humphrey saw them talking to his aide, he strode over and escorted them personally into his reception. After shaking their hands and posing for a photo, he announced that he had a gift for each. Reaching into his pocket, he pulled out a fistful of brass "HHH" pins that fastened in the back with a butterfly clutch. "These are our special campaign pins that we give to special friends," he told the flight attendants, "and I would like to give one to each of you."

The first stewardess reached out her hand to receive the gift. He ignored her outstretched palm and said, "Here, let me pin it on you!" With the practiced speed of a teenage boy in the backseat of an old Buick, he slid his hand down and inside the young woman's blouse while he fastened the clasp. The startled stewardess blushed through saucer-sized eyes, but her giggling smile never wavered. Onlookers chuckled while two campaign workers exchanged awkward glances as HHH moved down the line and, with unfettered gusto, pinned one to each woman's top.

As he fastened the last pin, someone in the crowd called out, "Muriel [Mrs. Humphrey] will give you hell for this!" He ignored the crack and completed the task. As the last flushed attendant straightened her disheveled blouse and thanked him, he looked over at Pat and me and gave us a wink. "Ahh," he exclaimed with a grin, "the joys of running for president!"

He shook my hand as he prepared to leave. I said, "You know, Senator, you were the envy of every guy in this room a minute ago." Then I leaned in and whispered, "And if you give me one of those HHH pins for my collection, I'll keep my mouth shut!" Humphrey looked down at me, smiled, and then reached into his pocket and produced pins for Pat and me.

Fifty years later, I still treasure the pin, which is on display in my office to this day. 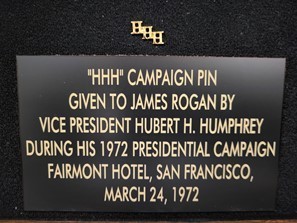 Humphrey lost the 1972 Democratic presidential nomination. He never again sought the presidency. During a routine medical checkup in the fall of 1976, doctors found a tumor and diagnosed it as terminal.

He refused to surrender. "Life was not meant to be endured," he said. "Life was meant to be enjoyed." He gamely resumed his duties in the U.S. Senate and helped lead the battle for President Carter's legislative agenda. Despite this brave determination, news clips throughout 1977 depicted a progressively haggard and dying man. He spent his final days calling old friends and political enemies to say goodbye. He made one such call to the man who had vanquished his dream in 1968, Richard Nixon, and invited him to attend his funeral.

In the final letter he sent me a few months before the end, he encouraged me to press on with my goals for a life of public service. He closed it with this advice: "We need good, progressive, honorable young people in government and politics. So, go to it. Work hard; study hard; fight the good fight; and, my friend, be of good cheer."

Even though our political philosophies parted long before I returned to Washington as a congressman, I always tried to live by Hubert Humphrey's advice—and by his example.