I took this photograph of presidential candidate George McGovern with my $12 plastic Kodak Instamatic camera, the San Francisco Hilton, April 5, 1972. He autographed it for me some months later.

As the gun sounded for the 1972 Democratic presidential nomination race, Senator Edmund Muskie (D-ME), who had run as Hubert Humphrey's running mate for vice president in 1968, remained the heavily favored frontrunner during the three years leading up to 1972. Universal expectations had Muskie winning New Hampshire's first-in-the-nation primary. Senator George McGovern (D-SD), largely unknown after over a year of campaigning, straggled far behind in the polls. On primary night, Muskie did very well. He won almost 50 percent of the vote in a field of five contenders. McGovern lost, but his grass-roots campaign did better than expected with a second-place finish at 37 percent. Immediately the pundits and network anchors proclaimed the meaning of the New Hampshire results in their peculiar version of political algebra:

McGovern lost, but he did much better than the pundits expected

The following morning, McGovern's name, and not Muskie's, splashed across the headlines. In the upcoming Wisconsin primary on April 4, McGovern parlayed his New Hampshire momentum into a stunning and unexpected first-place victory. This catapulted the near-anonymous candidate only days earlier into the frontrunner position.

The day after his Wisconsin win, McGovern brought his now-noticed campaign to San Francisco. For weeks his local headquarters couldn't give away tickets to his scheduled $25 per person fundraising dinner at the Hilton Hotel. Within minutes of Wisconsin's vote tabulation, the event sold out.

Today, we live in an era where tickets to political events cost thousands of dollars. It's hard to conceive that in 1972 the price tag for admission to a sit-down dinner for the leading presidential candidate at a major venue cost $25. Yet, for myself (age 14 at the time), the price might as well have been $25,000. Along with my 12-year-old brother Pat, we had no money for a ticket, but that didn't dissuade us from trying to get inside to meet McGovern.

We took the Greyhound bus from the East Bay to San Francisco and arrived at the Hilton three hours before the dinner began. We sat in the lobby hoping to see McGovern when he arrived. Not long after we parked ourselves, I saw a chunky man with a buzz haircut and wearing a Hilton blazer staring at us from across the room. He approached, identified himself as hotel security, and he asked what we were doing there. I explained that we had taken the near two-hour bus ride from Pinole to see McGovern. Once he learned that we had no dinner ticket, his already unpleasant attitude grew nasty. "Let me give you boys some advice," he said sarcastically. "Get back on your bus to Pinole and get the hell out of here. You aren't meeting anybody in this hotel tonight." Before we knew it, we found ourselves outside on the sidewalk.

Pat and I didn't surrender easily. We snuck back inside at another entrance, but the same guard nabbed us. Tossing us out once again, he warned that any further entry would result in our arrest.

I had an idea. Finding a pay telephone, I called the hotel switchboard, dropped my voice to the deepest baritone a 14 year-old could muster, and I told the operator that I was Senator McGovern's speech writer. I commanded her to put me through to his suite. To my surprise, she routed the call.

Dick Dougherty, McGovern's national campaign press secretary, answered. I explained our situation and he proved sympathetic. He arranged for us to get freelance photographer passes and complimentary dinner tickets at the press table. Dougherty told us to have the hotel security guard call him directly if he gave us any more problems.

We returned to the hotel and waited. It didn't take long for Inspector Javert to find us. He grabbed our arms and started yanking us across the lobby while saying that the police were on the way to arrest us for trespassing. When I told him to call Dougherty to confirm that we had tickets, he refused. Amid the yelling and the tugging, the hotel manager rushed over to investigate the disturbance. After hearing our explanation, the manager picked up a courtesy phone in the foyer and called McGovern's suite. A few moments later, the manager summoned the guard to join him over in the corner. I couldn't hear their discussion, but I saw the guard's face redden as the manager spoke with him harshly while poking an index finger into his chest. The guard stalked away.

The manager returned. "Personal guests of Senator McGovern are always welcome in this hotel," he said.

With the event still two hours away, and while we continued our lobby stakeout, I saw McGovern alone and unrecognized strolling from the elevator bank. Pat and I introduced ourselves, and the candidate (in no apparent hurry) settled into a high-backed lobby chair and invited us to visit with him for a few minutes. "I was just going to take a walk around the block," he said with a chuckle, "so I've got some time to kill." When we told him the story of the guard and Dick Dougherty, he laughed. "So—you're the boys, eh? Dick told me about your enterprising effort to join us tonight. We're glad to have you."

I asked how he felt about his sudden vault to the front of the presidential pack. He said he felt reluctant to claim frontrunner status just yet, but yesterday's Wisconsin result gratified him, and he hoped to continue his momentum.

Before resuming his walk, he obliged an autograph request. On an index card he wrote out in longhand and signed his campaign slogan for me: "For Jim, I make one pledge above all others—to seek and speak the truth. With kindest regards, George McGovern." 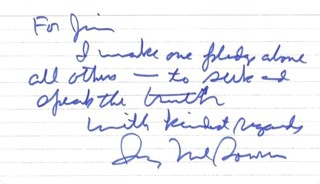 After thanking him and wishing him luck, we watched as McGovern rode the escalator down to O'Farrell Street for his constitutional.

Later that evening, and shortly before the dinner began, two couples chatting nearby came over to talk to Pat and me. One man in the group said they saw us in the lobby with McGovern earlier and he asked if we had gotten his autograph. I showed him the quotation, and they passed it around and congratulated me on the acquisition. It wasn't until they introduced themselves that we realized with whom we were speaking—movie stars Jack Nicholson, Warren Beatty and Julie Christie, along with pop singer Michelle Phillips from the 1960s rock group The Mamas and the Papas.

Following dinner, Congressman Don Edwards (D-CA) introduced McGovern to the packed and enthusiastic ballroom. I moved from the press table to the stage to snap a few photographs as the candidate urged his supporters to help him win the California primary and clinch the nomination.

At the end of the dinner, and as the crowd departed, I saw California State Assemblyman (later Congressman) John Burton standing nearby. He wore on his lapel a type of McGovern campaign button incorporating the American flag and a peace symbol that I had never seen before (or since). After introducing myself, I told him I collected political memorabilia and asked him to give me the badge. Burton didn't want to part with it, but my zeal wore him down and he relented.

Twenty-four years after he gave me the badge, John Burton and I served together in the State Assembly as colleagues. One day I wore his old McGovern button in my lapel and struck up a conversation with him in the chamber while waiting to see if he recognized my vintage treasure. Sure enough, after a few moments he asked about it. I recounted the story for him. "Those were the good old days," he sighed.

He looked at me dismissively. "No," he said. "I don't mean any of that shit. I mean the good old days—when we could take money out of the Assembly Rules Committee budget and use it to pay for our fucking campaign buttons!" 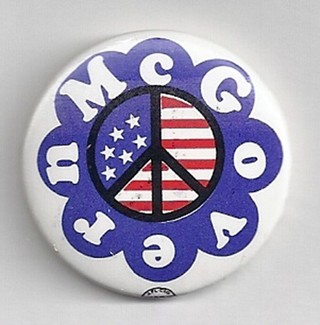 Assemblyman John Burton's 1972 memento of "The Good Old Days" that he gave me at the McGovern for president dinner, Hilton Hotel, April 5, 1972. (Author's collection)

Senator George McGovern won the 1972 Democratic presidential nomination, but he lost the election in a landslide to Richard Nixon. Decades later, during my own time in politics, I became friends with the man who gave me his autograph in the Hilton hotel in 1972. When I was in the state legislature, he told me after a luncheon we both attended that he had heard that I might be running for Congress in the next cycle. "You know, Jim, if you run, as a Democrat I won't be able to endorse you," he said apologetically. "But the fact I can't endorse you doesn't mean I can't take great pride in you if you win."

That meant much more than an endorsement.

When I went to Congress in 1997, with both of us back in Washington, he and I visited occasionally. I last saw him, of all places, when he spoke at the presidential library of the man who defeated him in 1972. At age 88 he gave a talk and did a book signing at the Richard Nixon Library in 2009. As an elegant touch, all the Nixon Library employees and docents wore vintage McGovern campaign buttons to welcome the Democrat Party's elder statesman. He died of natural causes in a South Dakota hospice facility at age 90 on October 21, 2012. Although we had little in common politically, I consider it an honor to have known this decent man and devoted public servant. 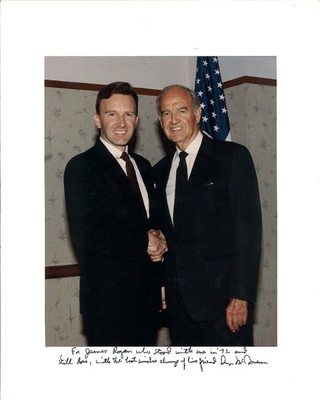 When writing this remembrance of my night at the Hilton with Senator McGovern, I wanted to track down Dick Dougherty and thank him for helping to create a fond memory for two grateful boys who tried crashing his event. In looking him up on the Internet I found this entry dated January 2, 1987: "Richard Dougherty, former New York bureau chief of the Los Angeles Times and press secretary for Senator George McGovern, died of lung cancer Tuesday. He was 65." Thanks again, Dick. I never forgot your kindness.